Help |
Get the APP
|
English
Home > Textile News > What is Silk?

The origin of Silk dates back to Indus Valley Civilization between 2450 BC and 2000 BC. However, the origins are still also seen 2500 BC in China. 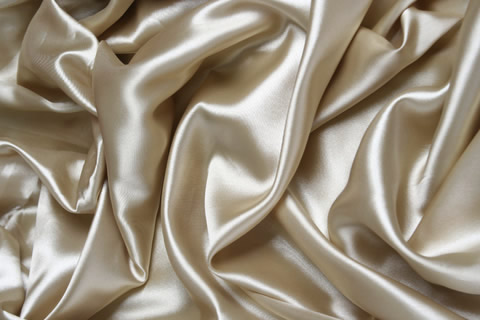 Silk's textile origins date back to 6000 BC, when the wife of the Yellow Emperor, Xi Ling-Shi, went for a walk among damaged mulberry trees and noticed glistening threads attached to worms eating the plant's leaves. Historians disagree about how long it took before Xi Ling-Shi realized the silkworms cocoons could be harvested into silk, but one version recounts the Empress dropping a cocoon into her tea and watching it unravel into silken threads. China maintained a monopoly on silk trade for thousands of years and orchestrated an intricate and famous trade system eventually extending as far west as Europe and Africa, which was known as the Silk Road. High-quality silk was also produced in Thailand, India and eventually Western Europe, but the material wasn't introduced to America until the 17th century; early settlers simply could not afford the expensive cloth. Synthetics were later developed as a substitute for the luxurious feel of silk fabric, but they dyed poorly and lacked the shimmering quality of silk's light-refracting prisms.

The famous fashion designer Oscar de la Renta compared Silk to diamonds; He, who makes the most gorgeous dresses would know. Silk is a beautifully lustrous fabric made from an animal fiber with the same name. It is the finest of all natural fibers and one of the strongest. Silk is regularly used to make garments, accessories, home furnishings, tapestries, rugs, despite its high cost.

What is silk made of?

The processing techniques of Silk – degumming and reeling, were taken from the Chinese technology, where Silk was originally believed to be born. Majorly, 97% of the raw silk comes from five Indian states – Andhra Pradesh, Karnataka, Jammu and Kashmir, Tamil Nadu and West Bengal.

The most abundant form of silk, a natural protein fiber, is cultivated from the cocoon of mulberry silkworm larvae. Silkworms lay eggs on special paper and eat only fresh mulberry leaves. Thirty-five days after hatching, the silkworms begin spinning their cocoons. Each cocoon yields 1,000 yards of raw silk thread, which is then spun to produce a “yarn” of silk. The process is time-consuming and delicate, which explains the high cost of silk. The fiber gets its brilliant shimmer from its structure, a triangular prism that reflects light at varying angles. Another variant of silk, “wild silk”, is produced by caterpillars other than the mulberry silkworm, and can be harvested in captivity much like traditional silk. The color and texture of wild silk tends to differ from the cultivated variety, and the fibers are typically shorter, due to damage by the emerging moth. To preserve the long, silken strands of fiber in cultivated cocoons, the larvae inside is typically pierced with a needle, and the cocoon is unraveled without damage.

Today, silk fabrics are prevalent in every country: from Indian saris to French couture gowns, it has pervaded all cultures. Its low conductivity keeps one warm in the winter, while its great absorbency wicks moisture away during summer. The feel of silk fabric is unmistakable: smooth and luxurious, the fabric ripples like the surface of water. This quality makes it especially suitable for sexy lingerie and elegant dresses. It is a fabric reserved for special occasions, a cloth meant to enhance a moment. Check out our bountiful collection of silk fabrics as well as our Silk Color Match Collection.

Silk production in China eventually led to the development of prominent pre-industrial trade routes. The Silk Road stretched from China to Western Europe, and Chinese merchants traveled up and down this trade route to exchange silk for the commodities of distant nations.

Mulberry is the easiest and least expensive type of silk fabric to make. Almost all the silk in the world is mulberry silk, and like other types of this textile, mulberry silk fabric is renowned for its strength, softness, and durability.

Since the production of eri silk fabric doesn’t require killing silkworms, this textile variety is also called “peace silk.” While hardly any eri silk is made throughout the world, this fabric is heavy and even more durable than mulberry silk. Since eri silkworms live on castor trees, this type of silk is sometimes known as “castor silk.”

Next to mulberry silk, tasar silk is the second-most produced type of silk fabric. This variety of silk is wild, and it is produced by silkworms native to India. Japan is also home to tasar silkworms, but the silk these worms produce is green.

Certain types of spider silk are highly tensile, but spiders can’t be bred like silkworms. Therefore, spider silk is extremely expensive to produce, which makes it invalid for textile production. Instead, producers use spider silk to make bulletproof vests, microscopes, telescopes, and other industrial or niche products.

Muga silk fabric is only produced in the state of Assam in India, and muga silkworms are semi-domesticated. While muga silk isn’t widely known in the rest of the world, generations of Assam residents have made muga silk garments for the nobility of this region.

A species of silkworm called Pacypasa atus produces coan silk, which is native to certain parts of Greece, Turkey, and Italy. These silkworms feed on pine, juniper, and oak trees, and while coan silk was widely used in Ancient Rome, coan silk fabric production today is limited, and this type of silk is mainly used to strengthen other types of silk fibers.