Now boasting a total of 100 participants from across the globe, including the likes of H&M, Chloé and Tommy Hilfiger, and aiding in the production of over half a million sustainably created pairs of jeans, the Jeans Redesign project is continuing to grow its mission of pushing the industry towards a circular mindset in denim manufacturing.

Launched in 2019 by the Ellen Macarthur Foundation (EMF), the programme consists of guidelines and requirements for the industry to follow when making sustainable and ethically made denim. Brands that have signed onto the initiative have each committed to producing products in line with these guidelines, with many already debuting jean collections under the project.

Speaking to FashionUnited, Juliet Lennon, the programme manager for the initiative, said of the project’s origins: “We took the iconic product jeans as a starting point on this whole journey. We started as a way to demonstrate that it is possible to design and make a garment for a circular economy today.”

Lennon, who has been at EMF for three years and moved onto the project in 2021, said it was this circular economy that was at the core of the project’s initial foundation and was at the centre of many queries from businesses who didn’t know where to start.

“The current fashion system is broken,” she said. “We are using resources to make products that are used for a very short amount of time and are ultimately thrown away. In recent years, many businesses from the fashion industry have started to take the steps to reduce their emissions. However, if we want to create a reevaluated system, we need to fundamentally rethink the way products are designed and made. For that, we need a circular economy.”

Based on this principle, the guidelines set all aim to work to ensure jeans stand the test of time, can be recycled easily and are made to have less impact on the environment and those who make them. Since its launch, the project has already hit a number of milestones, both unexpected and foreseen, and has made an array of adjustments in line with the ever changing industry as EMF continues to look towards a more sustainable future for denim. 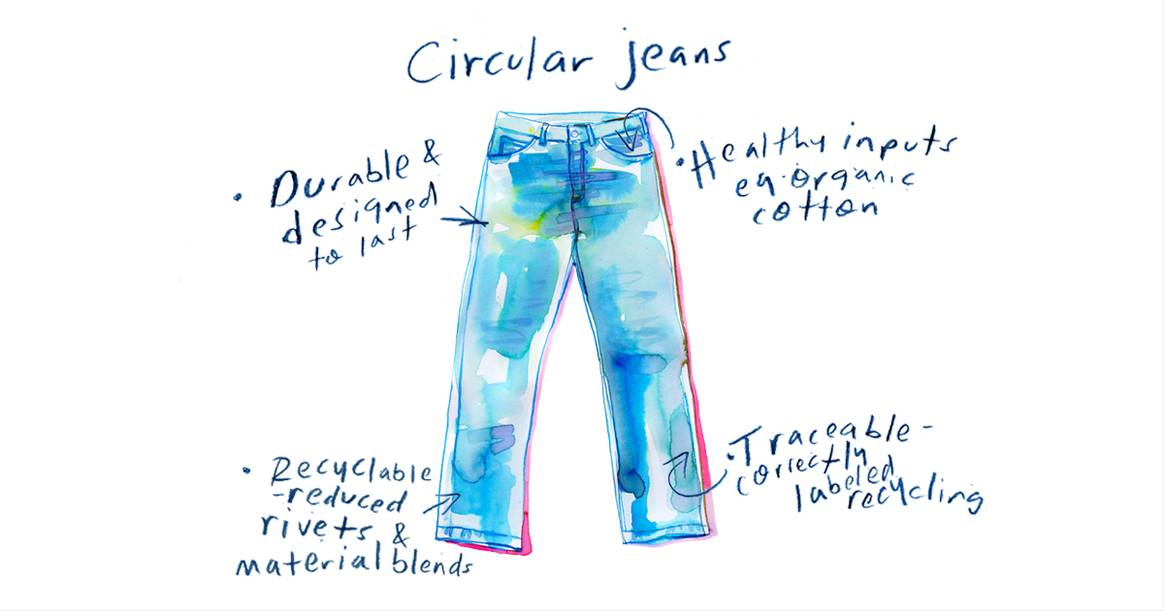 “Redesigning jeans was the starting point on the journey towards a circular economy for fashion,” Lennon said, also noting the excessive resources that are used to make the garment. “Jeans are at the heart of countless fashion collections, but they are no exception to the industry’s waste approach.”

Initially, 80 industry experts came together to create the guidelines, agreeing on the requirements needed to align with the principles of the circular economy. “We wanted to support organisations in moving beyond the theoretical discussions of what is needed to create a circular economy: testing the principles, bringing them to the market and identifying what solutions existed and what barriers remained,” Lennon said.

When discussing the starting phase of the project, she said, “It was a really tricky discussion. In the past, organisations may have dropped a collection with one or two qualities, but what we wanted to do was build guidelines with common definitions that meant those garments needed to be durable, traceable, recycled and using safe materials and processes, all at the same time.”

In February 2019, the foundation landed on a minimum bar, which became the first version of the Jeans Redesign guidelines - requirements that some organisations have since managed to exceed. One year later, the project grew to over 70 partners as it began looking to setting new standards.

“What made this unique is that we had fabric mills, manufacturers, brands and retailers all committing to taking this action and making products in these guidelines,” noted Lennon. “Across the value chain, they were working in a pre-competitive way to collaborate with others both in the project and outside.”

From H&M to Tommy Hilfiger, brand partners and their experiences

Wrangler is among those that have most recently implemented the Jeans Redesign guidelines into a collection, with the release of a denim line made from 100 percent organic cotton. Like others, the American brand revealed renewed versions of some classic styles minus qualities that either make them hard to recycle or use manufacturing processes deemed harmful to the environment. 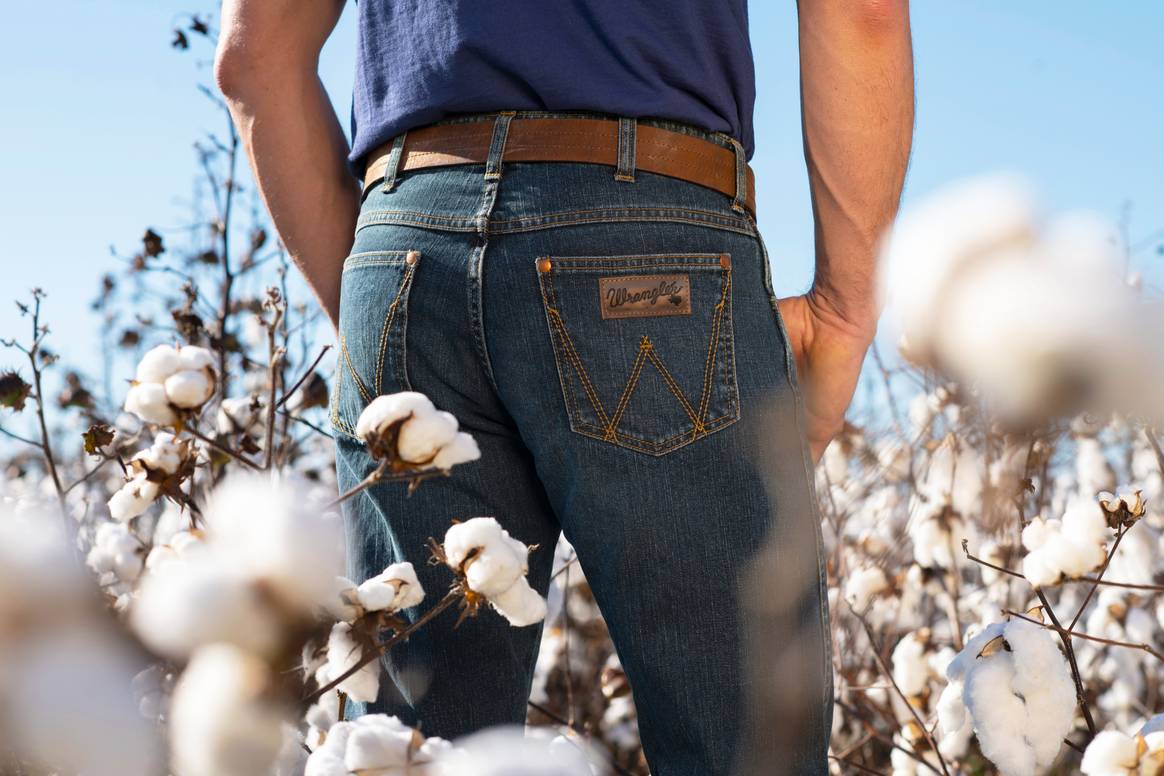 While many brands regularly release collections that follow the programme’s guidelines, each has contributed to the cause in their own way, resulting in varying outcomes.

“For milestones, there are two levels: the technical solutions, which we anticipated, and then the more cross-value chain collaborations, which were somewhat unexpected,” noted Lennon. “We have already seen some organisations apply the principles to products beyond jeans, such as chinos, t-shirts, jackets and some accessories. This is one impact that we didn’t anticipate but we were really happy to see.”

Lennon highlighted the project’s collaboration with H&M, one of the retailers she said had built on the partnership through its own circular product guideline for jeans, allowing its manufacturers, who were not part of the project, to also utilise the requirements. Additionally, the retailer began training employees on these new skills, Lennon said, dispersing knowledge throughout its whole organisation.

“We saw this cross-value chain collaboration, which is crucial, and organisations build on their internal knowledge and capacity of circular design principles,” said Lennon. “They also speak about breaking down typical organisational silos as their teams are having to think about various processes in a whole different way so that their jeans would fall in line with the requirements.”

Challenges and developments since the launch

While many brands have now committed to the project and already adopted it into an array of denim collections, when the guidelines were initially published, some had stated their concern or difficulties with a handful of the requirements that they thought they couldn’t meet.

“Rivets are a good example of that,” Lennon said. “Typically, rivets are used for either strength, performance or design, but they hinder the recycling process. At the beginning, there was a lot of push back when we suggested getting rid of them. The push back was so strong that we actually made it an optional requirement.” 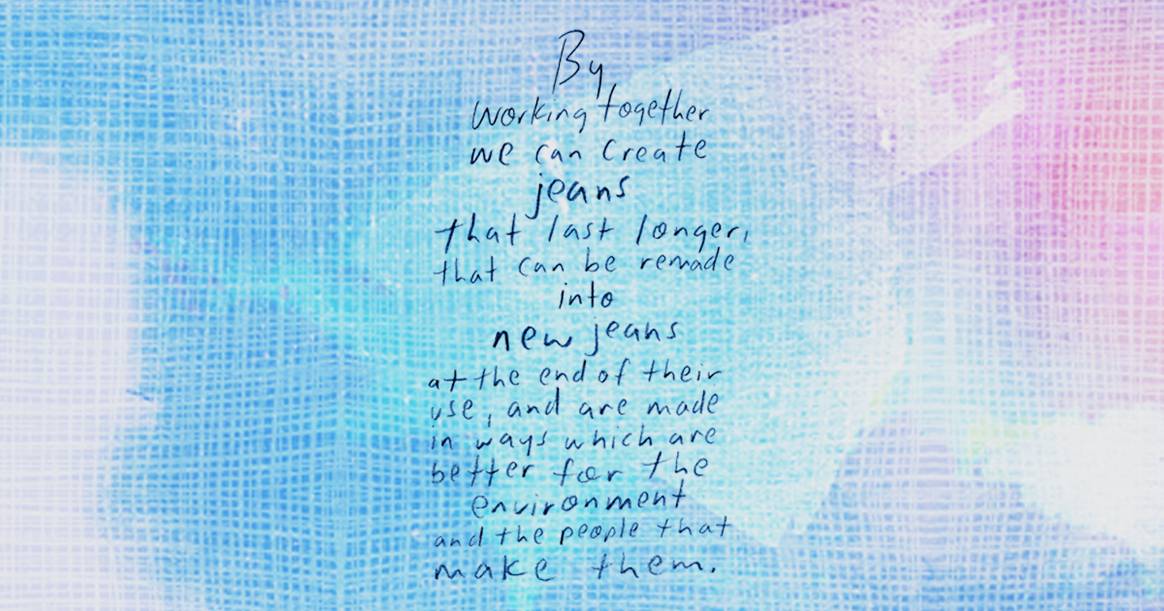 “Two years later,” Lennon continued, “65 percent of brands have removed rivets from their products, even though it was optional. Some got rid of them completely and others replaced them.”

Some criteria were tougher to crack than others, like cellulose-based fibre implementation, regenerative sourcing or finding a sustainable solution for zippers. However, many elements that participants thought were initially tough, are now widely accepted, such as the use of organic cotton, which was at first seen as one of the biggest challenges and is currently used by 90 percent of participants.

“As we look into the next two years, we have a clear list of what solutions exist, what can already be adopted and where the limitations are that we need to overcome,” commented Lennon. “We need to work together to scale those and innovate further. That is what we are doing with the current participant group.”

To get to this point, the foundation went through a process of trial-and-error, with no changes initially being made to the guidelines in order to evaluate the manufacturing process and highlight any solutions or gaps that may not have initially been identified. EMF then published its first insight report in July 2021, where it outlined all those findings and the clear calls to action they presented.

Following the report’s release, Lennon said the project saw an influx of interest and raised its capacity to 100 participants who were subject to updated guidelines, reviewed based on technology advancements and where the industry was moving. Lennon added: “We set a new minimum bar based on everything we had learnt - which we still expect participants to exceed, like they did in the first two years.”

One of the elements that was introduced was a mandatory minimum percentage of recycled content for every garment, something that was optional in the project's early years. The decision was part of the foundation’s goal of extending the use of recycled content and sending a strong demand signal to the industry. Circular business models were another addition to the agenda, after a couple of participants trialled them as part of the project. Now as an optional requirement, Jeans Redesign will also be able to collect data on these models and see what could come from them.

What to expect from the project…

“Ultimately,” said Lennon, “there is a way bigger appetite for the industry to work collaboratively on these design and innovation solutions than we may have anticipated.”

It is this area that has become a focus point for the project as it begins to look towards emphasising the importance of collaboration in the industry. Lennon said EMF was happy to see the other byproducts of the project and more non-denim products being applied to the guidelines. She added: “This was really the intention of the project, a starting point to get really practical and show that it was possible to take it further.”

“Going forward, we are working with our participants on cross-value chain collaboration, supporting them to overcome innovations,” Lennon added. “We will also be publishing the next progress report in 2023, shining a light on what has happened in these two years, what barriers were met and what action is being taken to come over those.”

Next: Victoria Beckham Shines In A Studio 54-Inspired Slip At Brooklyn And Nicola’s Wedding