Amidst concerns over use of toxic chemicals to make textiles waterproof, scientists from Aalto University have used an ecological method to make garments water-resistant with wax obtained from Brazilian palm tree leaves. The treatment is non-toxic and doesn't impair breathability. There is demand for sustainable ways to give water resistance to clothes. 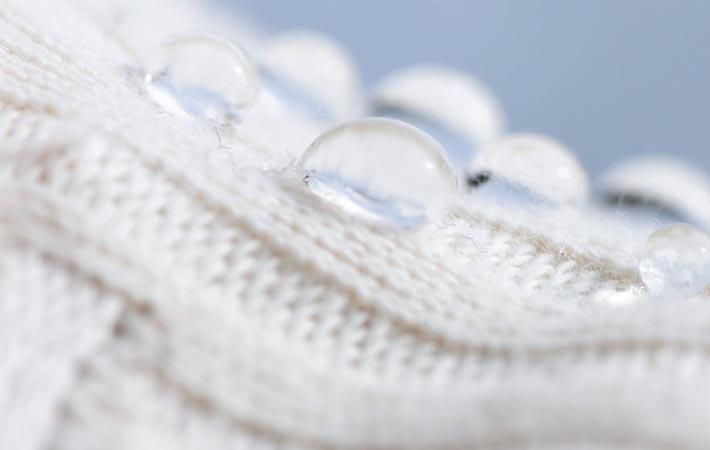 There is a growing concern over the environmental impact of textile production and many waterproof products on the market are prepared with toxic chemicals. This is increasing demand for new sustainable material alternatives, but making non-toxic, breathable and waterproof textiles, sustainably and economically has thus far proven to be a challenge.

Aalto researchers have developed an ecological and water repellent wax particle coating suitable for wood cellulose fibres, which also retains the breathability and natural feel of the textile. The coating uses carnauba wax, which is also used in such things as medicines, foodstuffs, as well as the surface treatment of fruits and car waxes. The new coating is suitable not only for textiles but also for other cellulose-based materials.

During the processing, the wax is thawed and decomposed in water into wax particles that are anionic (negatively charged) just like cellulose. For the wax particles to adhere well to the cellulose surface, something cationic (positively charged) is needed as a buffer, since the oppositely charged particles attract one another. In previous studies, a natural protein called polylysine was used for this.

However, as Aalto University PhD student Nina Forsman points out, “Polylysine is very expensive so in our current study, it’s been substituted with a much cheaper, cationic starch that’s already commercially available.” Though cationic starch is not quite as effective as polylysine, two layers of the starch mixed with two wax particles are sufficient to make the textile waterproof.

The multidisciplinary research team also included designer Matilda Tuure from the Aalto University School of Arts, Design and Architecture and as part of her master's thesis, she designed and manufactured three coats for which the wax coatings were put through their paces.

The wax coating can be applied to the textile by dipping, spraying or brushing onto the surface of the textile, and all three methods were tested. They found that dipping is suitable for smaller items of clothing and spraying or brushing is better for larger ones. In industrial-scale production, wax treatment could be part of the textile finishing process along with the colour pigmentation of the wax, which makes dyeing and waterproofing possible at the same time.

The team found that the wax coating is not resistant to detergent washing, so the product is best suited for less frequently washed outer garments such as jackets. For the sake of simplicity of use, the consumer could potentially apply the coating themselves to the textile after each wash, and this requires more research and development though.

“We tested the coating on different textile materials: viscose, tencel, cotton, hemp and cotton knitwear. We found that the surface roughness of textiles affects how well it repels water - the rougher the surface, the better. This is because, on a rough surface, water droplets contact the textile surface in a smaller area,” says Forsman.